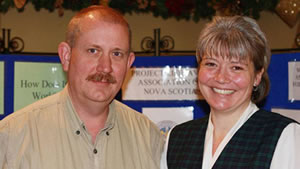 Ron and Nancy Arenburg, who live near Kentville, are longtime volunteer search managers with Valley Search and Rescue. (CONTRIBUTED)

SOUTH ALTON — It all started because Ron Arenburg was worried about his father getting lost in the woods.

He had been diagnosed with Alzheimer’s and was prone to wandering. So in 2009, Ron, an information technology consultant, began looking for some kind of technology that would help locate his father if he suddenly went missing.

That is when he discovered Project Lifesaver International in Virginia. It is a non-profit association that provides equipment, training and support to protect at-risk individuals, particularly those with Alzheimer’s disease, autism and Down syndrome.

Ron and wife Nancy Arenburg, who live in South Alton, near Kentville, are longtime volunteer search managers at Valley Search and Rescue.

“We knew from our search background that because anyone with Alzheimer’s or a cognitive disability is prone to wandering, they’re the most difficult people to find,” Nancy said in an interview before flying to Toronto for the weekend for a national search and rescue conference.

Nominated by the provincial government, the award recognizes their innovative work in bringing Project Lifesaver to Nova Scotia.

The program is also expanding in other Canadian areas.

Since bringing the project here in 2009, the Arenburgs and Valley Search and Rescue have trained all 24 search teams in Nova Scotia. Fourteen of those are now accepting clients. To date, there are 64 clients registered in the province.

The Halifax area, the most populated region in the province, has not come on stream yet, but searchers were trained last summer and the project is being put in place.

Last September, the Arenburgs trained the first team of searchers in Sussex, N.B. Earlier this month, they trained a Prince Edward Island team.

“It’s very humbling,” Nancy said of the award. “We never went into this for recognition. But it’s very gratifying.

“We’ve encountered so many wonderful people, and if we can do something to help them and our community, that’s what we’re interested in.”

In July 2011, an eight-year-old autistic girl went missing in woods in Margaretsville, Annapolis County. Because she was wearing a Project Lifesaver bracelet and registered in the program, she was located in 17 minutes, a rare feat by most search standards.

“Did it save her life?” asked Nancy. “We can’t say that for sure. But having been brought home in 17 minutes, she was none the worse for wear, and she could have been.”

It might have saved seven-year-old James Delorey, who died after spending two nights in Cape Breton woods in December 2009.

Veronica Fraser, the mother of the autistic boy, told The Chronicle Herald last year that her son would have worn a device if one had been available then.

The lightweight wristbands emit a radio signal unique to each user that can be picked up by hand-held and vehicle-mounted scanners. They cost about $300.

“We’re always proud of the work our ground search and rescue teams do, and this project is a testament to the dedication of these volunteers,” Education Minister Ramona Jennex said in news release.

“This technology is usually implemented by police agencies, but the Arenburgs and Valley Search and Rescue saw the potential for Nova Scotia and took the initiative to bring it here.”

The government helped secure $212,000 in federal funding to bring Project Lifesaver technology and training to all provincial search and rescue teams.