New cash for search and rescue 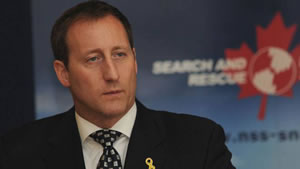 Canada is boosting its search and rescue capabilities, thanks to millions in funding divided among 19 life-saving projects.

Defence Minister Peter MacKay announced Sunday that $8.1 million is being handed out through the Search and Rescue New Initiatives Fund, which assists new projects.

Although none of the projects funded this year are specific to Nova Scotia, Project Lifesaver Manitoba should sound familiar.

When a seven-year-old girl was lost last summer in the woods in Margaretsville, Annapolis County, Project Lifesaver was instrumental in finding her — in just 30 minutes. Project Lifesaver uses radio-transmitting bracelets that are worn by people with a higher risk of wandering off or bolting, such as those with Alzheimer’s disease or autism.

But this year’s round of funding will still have an impact in Nova Scotia.

“There (are) projects that have national scope and application in every single province or territory,” MacKay said.

Other groups will use the money for new equipment, mapping and awareness videos.