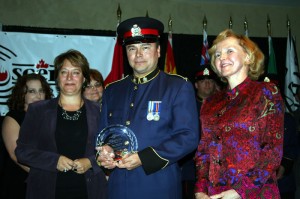 Sgt. Randy Antonio was honoured at the 2011 SARSCENE Banquet as the 2011 recipient of the Innovation award.

This award is given annually as part of the National Search and Rescue Program (NSP) Awards of Excellence.

Sgt Randy Antonio was nominated by Mr. David K. Schafer from the Province of Manitoba – Office of the Fire Commissioner.